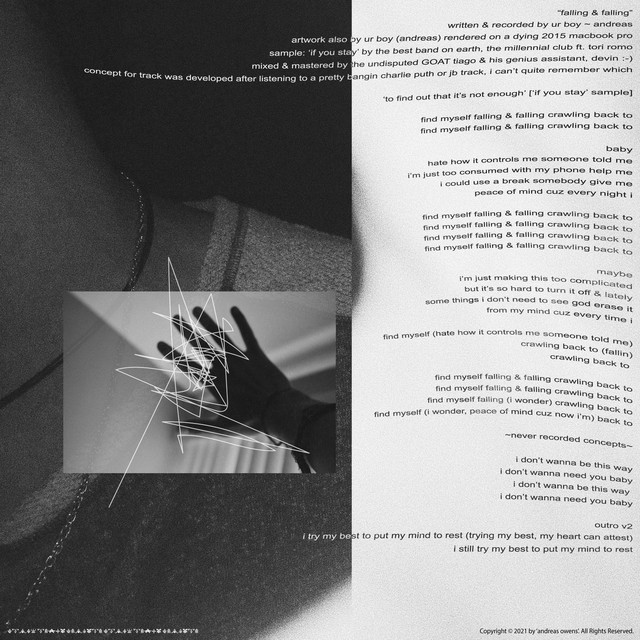 “How many times have we felt falling? But we should realize that after a fall, we can only stand up. "falling & falling" describes the difficulty to control passions and obsessions. A meaningful song, which can give back the lost courage to move up again.”

MARCH 19TH, 2021 – Los Angeles-based producer and singer-songwriter andreas owens releases his sophomore single, “falling & falling”, an experimental alternative pop track that samples The Millennial Club’s single, “If You Stay”, and is about our societal addiction to our phones and technology. The song follows the release of his incredibly lauded debut single, “don’t feel happy ◡̈”, which was well-received by outlets like DUMMY Mag, Substream Magazine, and We Found New Music, and landed on Spotify’s editorial playlists: Fresh Finds, Fresh Finds: Pop, and Study Break.

Though the song has a pop-inspired exterior, underneath it all shines a gutsy surge of unabashed realism. A commentary on society’s addiction to social media and the Internet, andreas owens has crafted an irresistible pop shell with a helpless, all-too-relatable core. Being at the mercy of our own desires, it reveals, on every level, our 21st century disposition to spend more time on our phones than with our friends and family.

Another major theme in the track is the idea of seeing things on our phones that we wish we hadn’t. There’s a sad truth behind the realistic and modern limits to which we can protect our souls. At the end of the day, it’s something we brought upon ourselves due to our learned obsessive nature for attention and social engagement, and while at times it can be beneficial, it too often isn’t.

“The concept behind ‘falling & falling’ alludes to our collective (and my own) societal addiction to our phones. I remember having a conversation with my friends about how we all kinda want to be on our phones less, but still sadly just find ourselves ‘crawling back’ to them every single day. I think we’ve all had similar thoughts, wondering, ‘omfg how is it possible that I’ve been scrolling through TikTok and Instagram for two hours?’”

“Oftentimes, while it’s enjoyable to catch up on friends’ lives and see what they’re up to, these days, I feel like half the time I don’t even like doing that anymore because I’ve created such a negative relationship with social media and the online space. The Internet is more relevant now than it’s ever been, and ‘falling & falling’ is a screenshot of my relationship with it.”