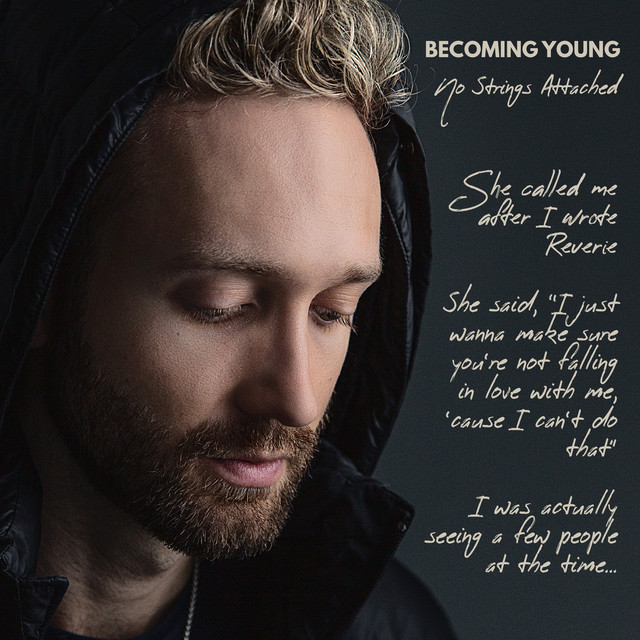 “Singer and songwriter Brandon Calano, who writes and performs under the pseudonym of Becoming Young, combines the best of modern pop music and our beloved folk. After listening remains both easy and exciting feeling of freedom and unity!”

Is a connection ever purely physical? Becoming Young’s Brandon Calano finds out the answer the hard way on his invigorating new pop single, “No Strings Attached.”

It started simple enough: in the backseat of a friend’s car Brandon kissed a mysteriously exotic girl. The two met at a party earlier that night but didn’t hit off until they were under a magnificent, crisp Colorado summer sky, nestled in a friend’s car. It was a buzzed romance—blurry, exciting, and impulsive.

How do you follow an evening like this? The short answer is you go on another date, and then you get disappointed that the connection isn’t real, and then you move on. When the connection is real, however, complications arise. Brandon came home from said proper date euphoric and subsequently wrote the single “Reverie.” This alluring new woman called him the next day, and matter-of-factly stated: “I was just calling to make sure you’re not falling in love with me, ‘cause I can’t do that right now.” Turns out that carefree kiss wasn’t so carefree.

“When I wrote ‘No Strings Attached,’ it was mainly about lust. I had no idea I would fall for her to the extent I did,” Brandon recalls. “Looking back, it’s astonishing how much I’ve developed as a person since writing this song.”

“No Strings Attached” is almost a breezy pop gem, replete with acoustic guitars, washes of ambient textures, heavenly harmony vocals, and lead vocals that undulate between urban-pop rhythmic flow and soulful melodicism. The tune’s slick bounce—a signature touch courtesy of Sony/BMG producer Austin Shawn—lends it an urban strut. Another powerful dynamic touch is the contrast between the detached cool verses and the explosively hooky choruses that recall smashes by pop artists such as Troye Sivan and Glass Animals.

Thematically, “No Strings Attached” is partially a flippant response to the initial phone call. In the pre-chorus, Brandon sings: ‘Cause there's a couple Colorado girls I love/Couple of east-coast honeys I want/And this LA babe that keeps me up/I know it's trouble, but I just love the rush/So baby don't call my bluff, ‘cause I don't need your love. This is all playful posturing, of course, bordering on denial, and the push/pull of the verses and choruses foreshadows reality bursting out. The truth is, Brandon is soon to be attached, heartstrings and all.