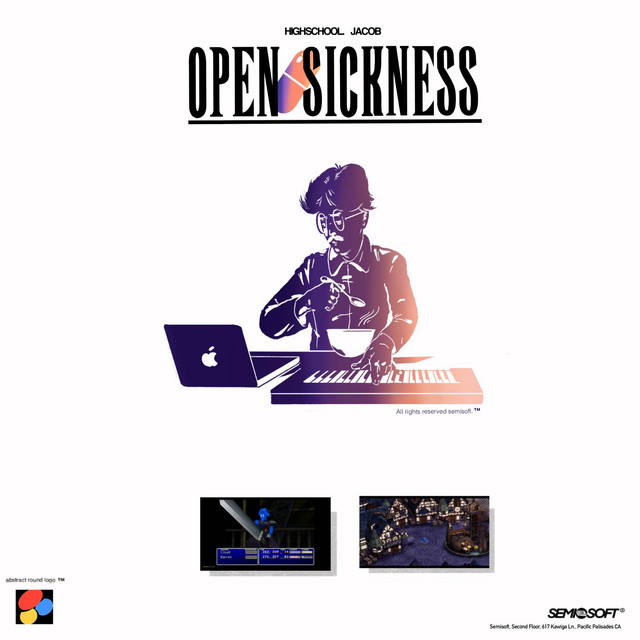 “Funk and Nu-disco has long been a favorite of many music charts. And the music Highschool Jacob no exception. New single Open Sickness filled with vintage sound of analog and digital synthesizers, drum machine and quality samples.”

Los Angeles' Highschool Jacob is ready to share his highly awaited single "Open Sickness," the fourth release from his "HSJ 2020" collection. The series of singles each come with a corresponding video game (yes video game!) and have garnered praise from tastemakers worldwide.

The alternative-pop project based out of Los Angeles was started with the intention to combine elements from modern pop and R&B. Inspired by art pop, indie rock, and nu-disco, Highschool Jacob (HSJ) continuously delivers music that is both deeply personal and sonically riveting. Having mastered retro-inspired jams, HSJ shares feel-good music influenced by our favorite parts of the '70s and '80s.

"full of soulful synths that pair well with its downtempo beat." - mxdwn

"Nostalgic in name and in sound this song hits all the notes." - Beat Lab Academy

"It's not hard to understand the magnetism to this curious alt-pop act." - The Music Ninja

HSJ takes it back to his roots with the gorgeous indie-pop tune "Open Sickness." A memorable guitar melody opens the track and leads you into soaring harmonies and echoing verses swirling in a dreamy, synth-laden soundscape. This elevated-ballad is an ode to moving on and accepting responsibility; Highschool Jacob embraces the hard conversations we need to have with ourselves in the wake of emotional grief.

He explains, "This song was written after a difficult conversation with an ex on a cold winter day in New York City when I was crushed with the realization that she had undoubtedly moved on. I began writing the song focused on how sorry I felt for myself, but then I realized I was the reason for the circumstances in the first place. How dare I approach someone I had been apart from for so long and expect them to feel the same way I did? How dare I meet their emotional maturity with tears? Often these sort of songs (especially from the male perspective) look to demonize and shift blame to the other person, and I wanted to draw attention to how that is often not the case. I wanted to write the angry breakup song where my ex was some crazy mean girl and make myself the victim, but in the end it was my fault. I couldn't make her the bad guy no matter how hard I tried."

Tastemakers like Atwood Magazine, Earmilk, and mxdwn have supported the project from the start and HSJ has climbed HypeMachine charts hitting the #1 Spot on the Popular Charts. Additionally, he has been featured on coveted Spotify playlists like Fresh Finds and more.

With every single release, Highschool Jacob and creative collaborator Jack Herzog created a flash game available on the Highschool Jacob website to coincide with the single release, giving listeners a chance to further dive into the world and ideas wrapped into each song. Inspired by vintage video game advertising, they carried that theme over to the artwork for each track release as well. With the onset of the COVID-19 pandemic and resulting quarantine, HSJ realized that everyone could use some fun until life gets back to normal.