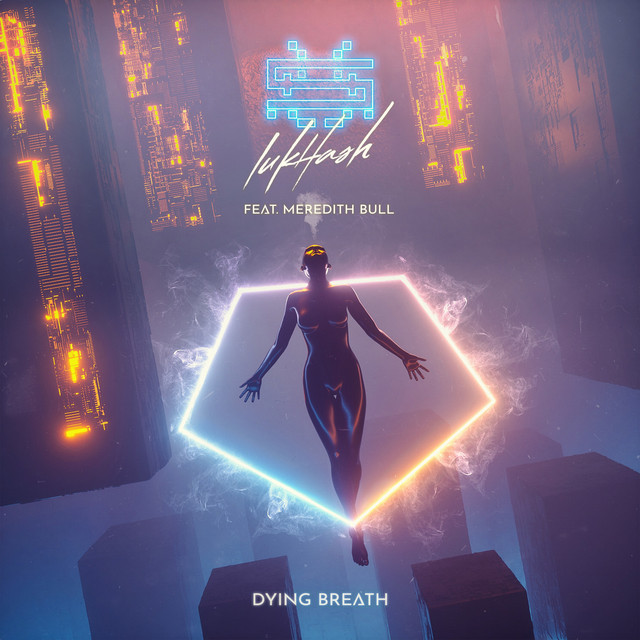 “A mysterious and truly memorable piece. -Dying Breath- combines the melody and rhythm of dark and synth wave, in which the union of electronic, experimental and neo-gothic music makes this track neo-romantic of the 21st century. Definitely in the collection!”

LukHash returns with a darkly atmospheric, retro synth track featuring the ethereal vocals of LA-based artist, Meredith Bull. ‘Dying Breath’ is the final single released from, ‘We Are Stardust’, the new album from LukHash, forthcoming April 9th on influential, retro synth label NRW Records. The classically trained musician from Poland, now Edinburgh-based, is making waves with his innovative blend of modern electronic music production, 80’s nostalgia, dystopian cyberpunk and retro arcade gaming culture. His fanbase is global and growing fast with his last two albums topping the electronic sales charts on Bandcamp (with ‘Transient Offworld’ hitting #8 in the overall Bandcamp sales chart). His music has broken the 10 million streams barrier on Spotify, while videos of his experimentation with custom-modified Commodore 64 computers and hacked, original Nintendo Gameboys went viral on YouTube (and more recently TikTok). LukHash is an exciting and creative artist set for big things in 2021. ‘Dying Breath’ is out now on NRW Records – stream / download here: lukhash.lnk.to/DyingBreath.

LukHash embraced the nostalgia of the 8-bit and 16-bit machine-generated sounds of the old Commodore 64’s and Nintendo Gameboys that he grew up listening to. Together with the 80’s pop and rock his parents loved, these influences became a significant part of his music as he began to fuse them with his contemporary productions. He became fascinated with the classic computer sound chips and shared videos of his ideas to his YouTube channel which took on a life of their own, as retro synth fans, ‘chiptune’ fanatics gamers and electronic music lovers across the world joined him in his obsession. With his skills honed LukHash now has a unique sound which he sometimes describes as ‘Chipwave’ – a fusion of synthwave, chiptune and modern electronic music.

Meredith Bull is a hugely talented artist, going viral on her own accord thanks to a creative and amusing TikTok presence, where she has now reached over 2.5m likes for her creations. She has collaborated with artists including Elijah Kelley, LSDream, and Taylor Kade. She first joined forces with LukHash last year on ‘Big In Japan’, a cover of the 80’s Alphaville classic, which was so well received that the duo have been working on more collaborations, starting with ‘Dying Breath’ – watch this space!

‘Dying Breath’ pulls the listener into a futuristic world with big chords, a jagged synth bass and acid riff creating a sense of flying through the unknown. The retro electronic beats drive things forwards while Meredith Bull’s angelic, almost dreamlike vocals add to a deeply emotive track. The chorus keeps building with the strength of a classic power ballad adding to the dystopian imagery, but somehow the track is still infused with hope for the future.

‘We Are Stardust’ will be LukHash’s ninth album underlining how prolific this artist is. NewRetroWave is recognised as the key driving force behind the burgeoning retro synth scene and NRW Records is the ideal label for LukHash. NewRetroWave has provided a platform for every significant artist creating this sound at some point as its YouTube channel has grown to over 1.13 million followers.

LukHash’s musicality is undeniable but his desire to create something new while so clearly enjoying his influences makes him an artist who stands out. His futuristic, cyberpunk vibe has roots in the sounds of an electronic past. LukHash’s music is connecting across the generations and excitement for his new album continues to grow.