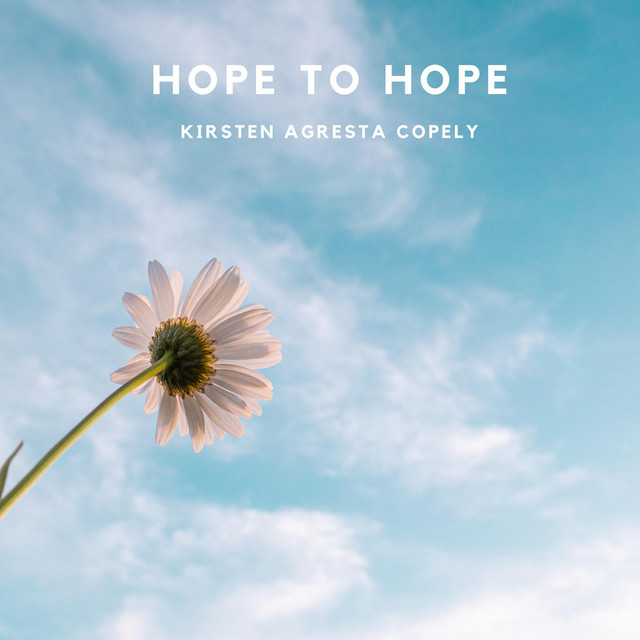 “Kirsten Agresta Copely is a real magician on a musical Olympus. Harpist, composer and arranger, with a unique and elegant instrumental sound. Her new album Hope to Hope is a real treat for our tired souls.”

Hope to Hope is a softly flowing, calming harp solo reflecting the resilience of mankind. “Hope bubbles up within us and keeps us moving forward against all odds,” says composer & harpist Kirsten Agresta Copely.

KIRSTEN AGRESTA COPELY is a harpist, composer, and arranger. Known for her unusual command of genres like hip-hop in addition to classical music, her prolific career has taken her throughout the United States, Europe, South America, Israel, Japan, and the South Pacific; she has performed for heads of state, in blockbuster movie soundtracks, alongside Billboard 100 artists, on late night television, and with the most recognized symphony orchestras in the world. Composition marks Copely’s latest addition to her career: she released her first album as composer, Around the Sun, in January 2020. The album, a collection of new age/ambient works, is a collaboration with her husband Marc Copely, credited as producer, engineer, and mixer. Recently, One World Music UK praised her first single as “a rich weave of melodic brilliance...a single you could leave on repeat for hours.”

Steeped in rigorous classical training, Copely’s performance career began at an early age: by fourteen, she performed a full solo tour of the British Isles, and continued to gain attention in the classical world by winning Bronze Medal in the 1st USA International Harp Competition, debuting as concerto soloist at Carnegie Hall and Lincoln Center soon after. This busy period in Copely’s career marks the start of a long tenure of classical performances, including solo performances in Dublin, Peru, and Amsterdam, among others. Currently, she serves as Principal Harpist with the Mostly Mozart Festival Orchestra at Lincoln Center and performs regularly with the Nashville Symphony and The New York Pops.

While she maintains a heavy schedule in performing classical repertoire, she has also found an uncanny connection with mainstream audiences. Following a feature in PEOPLE Magazine’s “Up & Coming” column, her performances grew increasingly illustrious, culminating in a performance with Beyoncé at the second official White House State Dinner for President Barack Obama, First Lady Michelle Obama, and Mexican President Felipe Calderón. Other performance highlights include the MET Gala with musical guest Frank Ocean, a benefit concert with Jay Z at Carnegie Hall, and Tony Bennett Celebrates 90: The Best is Yet to Come at Radio City Music Hall, which aired on NBC.

Copely’s charismatic, telegenic presence on stage has also allowed her to share a prominent spotlight in a variety of pop-culture settings: she has performed on a full slate of late night and morning show television programming, including Saturday Night Live, Late Night with David Letterman, The Tonight Show with Jimmy Fallon, Late Night with Stephen Colbert, and The Today Show. Performing live, she has played a gamut of the world’s biggest stages, from Madison Square Garden to Lollapalooza, alongside Lady Gaga, Stevie Wonder, Jay-Z, Beyoncé, Enya, Michael Bublé, k.d. Lang, Andrea Bocelli, Lady Antebellum, Alicia Keys, Kanye West, The Who, Adam Levine, John Legend, and The Roots.

In the recording studio, Kirsten has also become the pop industry’s go-to harpist: most recently, she can be heard on American rock band Evanescence’s newest album, Synthesis, reuniting with her former harp student, lead singer Amy Lee. Other notable collaborations include a feature on Erykah Badu’s album: New Amerykah Part Two: Return of the Ankh (“Incense”) and recordings with Lionel Richie, Alison Krauss, Bonobo, Mandy Barnett, Norwegian soprano Sissel, and Jamie Lidell. Furthermore, she can be heard on numerous video game, TV and movie soundtracks, including Outlander, Star Wars: The Old Republic, Night at the Museum: Battle of the Smithsonian, The Tempest, Sex and the City 2, Disney’s The Music of Pixar Live!, My Little Pony: The Movie and the JD Salinger biopic Rebel in the Rye.

Originally raised in Bloomfield Hills, Michigan, Kirsten Agresta Copely has served as the Associate Professor of Harp at Vanderbilt University Blair School of Music since 2017. Her own discography includes two solo performance albums: The Covers Album (2019), which includes 12 covers of hit pop singles, and Dream World (2001), a collection of relaxation-oriented classical works transcribed for harp, with many transcriptions done by Copely herself. She expresses deep gratitude to her pedagogues, Nancy Allen and Susann McDonald, the latter of whom mentored her for over a decade. She holds degrees from Indiana University (B.M. & M.M.), where she was awarded the Performer’s Certificate for outstanding musical performance. Ms. Copely is a member of the World Harp Congress Board of Directors and a member of ASCAP.