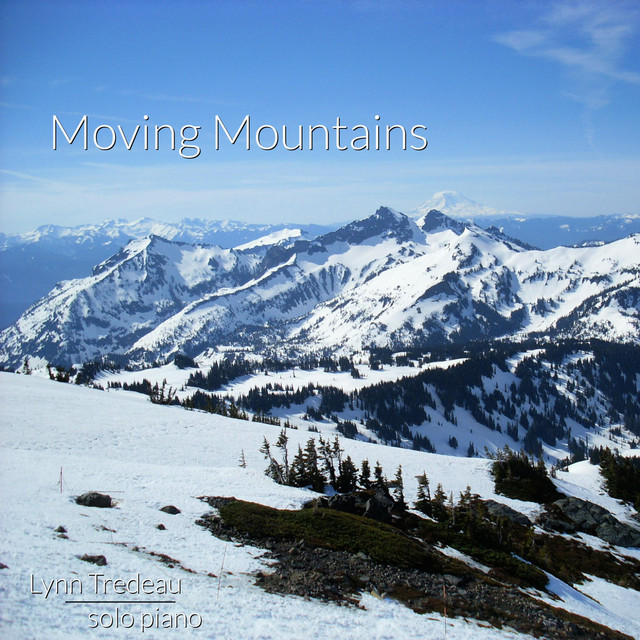 “In nature, everything is harmonious; The wind blow among trees, rustling leaves in rainy woods and moving ice mist over the high mountain peaks. Feel like a part in the unified system of this creation; -Lynn Tredeau - Moving Mountains-.”

"Sometimes life throws you a challenge and just getting through the day feels overwhelming. My recent health concerns have definitely forced me to rethink everything in my life and make many adjustments. It feels like MOVING MOUNTAINS, but every step forward is a triumph!"

Lynn Tredeau is an American musician who lives and performs in the Pacific Northwest. She got an early start in music and by the time she was six, her parents arranged for a surprise delivery of her first piano. The surprise part was ruined when Lynn took the call from the delivery company confirming the arrival of her piano, but that didn’t dampen her enthusiasm for playing. She was a natural musician and by the time she was sixteen, Lynn had mastered classical music on her piano, played guitar for her school’s jazz band, flute and clarinet in the orchestra, saxophone in the marching band, and played hymns on the pipe organ at church. Early musical influences range from artists like Nate King Cole to bands like Creedence Clearwater Revival.

She was born in St. Paul, Minnesota. When she and her husband started their family, they relocated to Alaska, where they lived until their children left home to attend college. Lynn taught in the Seattle, WA area until she and her husband retired and settled into rural Idaho. Though she had always wanted to attend college and earn a BA in music, life took Lynn on a different path. She relished her life with her family and devoted most of her time to her husband, children, and home. One year, her husband gifted her with an upright piano to replace the beloved instrument of her childhood. Grateful to have a piano of her own again, she played occasionally—when she could squeeze in a bit of practice between her brood’s many activities. As her children moved into adulthood, music once again became a consuming passion for Lynn. Her dream of owning a grand piano came true, and slowly but surely, she began to transition from playing music others had created, to composing her own original pieces.

After discovering the music of Michele McLaughlin on Pandora, Lynn found her calling in the world of New Age music. She released her debut album, Echoes of Life, in January, 2015, which brought multiple nomination including Best New Artist 2015 by Enlightened Piano. Lynn’s second album, SnowLight (A Christmas Memory), was released in September 2015. It quickly went to #1 on OWMR received many nominations and won Best Holiday Album 2016 at Enlightened Piano Radio. In April of 2016, A New Dream became her third release. This album charted on OWMR top 10 for 8 months, was nominated multiple times and opened a door for Lynn's music to be heard on SiriusXM radio. Album four, titled Shifting Sands, released in May of 2017. After multiple nominations and charting at #8 at Zone Music Reporter, Shifting Sands was nominated for Solo Piano Album of the year at ZMR. Fellowship of Solitude, Lynn's fifth album charted at #7 worldwide and the nominations continued to come. This album was honored with the prestigious Zone Music Reporter (ZMR) 2018 Best Solo Piano Album. She has received glowing reviews: Kathy Parsons of Mainly Piano wrote, “Many of her pieces have a quiet hymn-like quality” and Steve Sheppard from One World Music Radio said, “She has a style that is both gentle and artistically clever…” Dana Wright at New Age Music Reviews noted, “The art of sharing emotion through music has to be one of this artist's greatest talents....” The year 2019 will see Lynn release her sixth album and several joint projects that will take her music into new territory.

Though she suddenly lost both of her parents a decade ago, Lynn knows that they would be thrilled to see how many doors music has opened for her. They were always supportive of her endeavors and her song, Beyond the Veil, from her debut album, is dedicated to the two of them. She continues to build her musical legacy and remains open to any path her journey takes her. She still dreams of returning to the many instruments of her youth and trying her hand at building her own arrangements for future albums. Though she is in the beginning stages of a full-time career in music, Lynn’s prodigious talent and success thus far, ensure that she has a long, fulfilling road in music ahead of her.