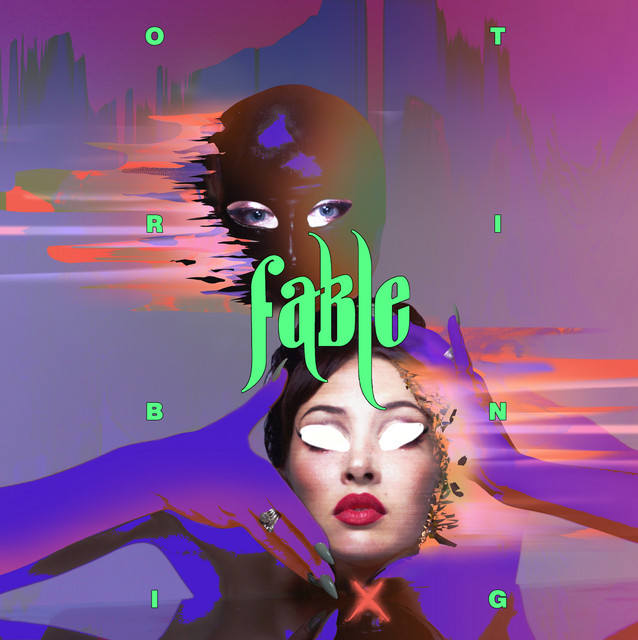 “Sit back and relax with Fable-Orbiting. Let the calm singer's voice clean your mind together with a slow beat and rich percussion atmosphere.”

Fable kicks off her 2021 with brand new single ‘Orbiting’, out today via Naim Records. This latest offering, which premiered on Chris Hawkins’ BBC 6 Music show yesterday, continues the Brighton-based singer-songwriter’s much anticipated return and sets the tone for her forthcoming debut album, due later this year.

A hauntingly stark, yet hopeful track that blends elements of trip hop and neo soul, ‘Orbiting’ laments the outward disconnection and isolation of our modern society; Fable’s exquisite vocals sliding over a traipsing beat and eerily beautiful soundscape.

“Orbiting is quite literally and metaphorically, an observation of the earth from far away. It takes a great big step back and sees that everything is intertwined on this little marble hurtling through infinite space. In a world that's more connected than ever digitally, I can't help but feel we have been segregated in every other sense.

Aside from the obvious isolation the pandemic has brought us, I wanted to highlight the breaking down of our communities, the ever polarizing and distilling bubbles of opinion thanks to the algorithm, and our society’s alienation from any kind of humane purpose. It's very much open to interpretation but I hope it resonates on many levels, and leads with a message of love and unity,” Fable explains.

Having built up a reputation as one of the UK's most promising new artists, being lauded by the likes of The Guardian, Mixmag, Q and Rolling Stone, collaborating with Orbital and playing at Glastonbury, the tragic loss of a close friend and resultant burnout and depression led to Fable taking time out from her music career in 2016 to protect her mental health. Four years later, and now an ambassador for mental health charity My Black Dog, Fable is relaunching her sound to the world, with previous single ‘Thirsty’ unveiled in October. Newly-signed to Naim Records, the label wing of the award-winning premium audio brand, she has recorded a debut album of genre-fluid, searingly honest and darkly beautiful music that spans from urgent post punk to introspective electronica, whilst posing questions that are both timely and personal, yet timeless.

What happens when a rising star suddenly cuts to black? Disappears from view not with the traditional, time-honoured arc of ascent and descent, but an instantaneous, seemingly-unexplained and voluntary vanishing?

The strange case of Fable is one such story. Holly Cosgrove was still in her teens when she started turning heads. Born and raised in the pretty Devon resort of Paignton, the daughter of a Glaswegian forklift truck driver, she moved to Brighton in her late teens, reinventing herself as the dark electro-rock entity Fable. An EP created in collaboration with Archive, the huge-in-Europe trip-hop/post-rock outfit, highlighted her powerful, portentous voice and immediately seized the attention. Her early live shows sealed the deal, wowing an intimate crowd at The Great Escape festival and supporting alt rock legends The Cult at their Manchester, Bristol and Brixton Academy shows. Holly was then headhunted by Paul Hartnoll of Orbital to guest on his 8.58 project, with whom she also appeared live, including a slot at Kendal Calling, and performed at Glastonbury in her own right.

Word was spreading fast, and critics were enraptured. The Guardian praised her “brooding cinematic electronica”. Q compared her to “Beth Orton swapping her six string for synthesisers while exploring her darker, more dangerous impulses”. Rolling Stone called her “independent, strong and mysterious”, and Mixmag was bowled over by her “ridiculous quality vocal”. Line Of Best Fit, Popjustice, Clash and CMU also heaped on the hallelujahs, and none other than Gary Numan was moved to rave “What a find”. The buzz around Fable was building to a rumble of breaking thunder. But, for reasons tainted with tragedy, the expected lightning-flash crescendo never came.

In early 2016 Holly lost a close friend, with whom she had previously been romantically involved, to suicide. “She was 23 when she’d had enough. I saw a frightened girl dangling above dangerous narratives, medicated up to the eyeballs, drowned by the internet’s toxicity and hung out to dry in underfunded institutions. I got very swept up in that relationship, trying to stabilise it. She went downhill, she was being sectioned every other month, and I was on the phone a lot trying to help her with that. She decided to cut ties with people who were trying to help her and keep her on a level. And she left.”

For Holly, life changed forever. “I remember that week being a real milestone that changed my perception of what's important.” One result of the aftermath of her friend's suicide was that Holly has become an ambassador for the mental health charity My Black Dog. “It's similar to The Samaritans, but the people you can call at the other end have been there, at the end of their tether. If she had had that,” Holly reflects, “a friendly stranger would have been so beneficial.”

As an artist, Fable's voice was stilled by the trauma. “When you sing, it's like a window to your soul. It's an instrument that shows all your emotions. And you can't hide anything in that. And when all that happened, I couldn't embody the thing that I wanted to embody, because I was so sad. I needed to leave it for a minute, before I ruined it for myself.”

The career which began with such stellar promise suddenly unbegan. Fable became Holly again, took herself out of Brighton, out of music, and submerged herself in regular jobs and anonymous normality. She watched quietly from the shadows while other female artists, from Christine And The Queens to Billie Eilish, rose to prominence by exploring gender-fluid identities and moody electronica. In the wake of the tragedy in her personal life, reconnecting with her artistic muse took time. “The whole thing was just so dramatically sad it forced me to take a break and do some digging in my soul garden. A few years later, my creativity came up with the flowers.”

At 24, still younger than half this year's hotly-hyped newcomers, Fable is pressing the un-pause button and ready to (re)launch. Newly-signed to Naim Records, the label wing of a prestigious high-end audiophile equipment company, she's been working with Jonas Persson, the Swedish producer whose CV includes collaborations with Justice, John-Paul Jones and post-punk legends Jah Wobble.She's justifiably proud of the new material. “It's the most truthful writing I've ever done. It's much more reflective of who I really am.”

The first fruit of Fable Mk II is lead single “Thirsty”, a melodramatic, Medusa-haired, dragon-breathed barnstormer which is already being hailed by those who have heard it as the most extraordinary thing she has released to date. “The song,” she says, “is about taking the beauty of life for granted and how over time we write things off as mundane because they’re a constant, like the sky’s always there, but actually it's a weird miracle that we even exist under it.” The stealthy, Portishead-inflected “Womb” is another standout track. “That song's about flux, cycles and change,” she explains, “moving on to the next thing out of necessity, the constant death and rebirth of your mind and your body, before we have time to analyse who we are, we’ve already changed.”

In a world of shrinking attention spans and incessant noise and chatter, Fable is defying the received logic that modern listeners can only handle music in tiny bites. “I’m going old school and releasing an album,” she proudly states. “I think people can concentrate for more than two minutes, even young people. I like pressing Play on an album, walking away, and getting on with something, while my ears are totally transported for 45 minutes.”

The versatility of the Cosgrove-Persson collaboration is demonstrated by “Unequal”, a minimal avant-R&B schaffel reminiscent of Janelle Monae meets Goldfrapp. “That's a bit of a wild card. The intention was to create this mechanical marching that quickens your heart rate, and then flood it with sharply-delivered lyrics about humanity being organised by algorithms, globalisation, and my own fears about powerful systems. The chorus is an attempt to remember the simplicity of life before the age of information.”

“The energetic party head in me,” she says, “wanted to write banger after banger”, but Holly worked to suppress that tendency in the interests of preserving unity of tone. That impulse, however, is expressed here in the thumping “5am”. But it isn't a simple hedonistic excursion. “'5am' is a bit of nervous neurosis. It's a frustrated song, it’s about having trouble sleeping, so the music needed to be driving and restless.” The turbulent “Swarm” began one grey-skied Welsh morning, listening to Radiohead and strumming the same two chords for an hour. “Then ‘Where do I end, where does the world begin?’ was scrawled in my notepad. It’s making a stab at a difficult subject. What is I? These are the things that go through your mind when you start self-isolation, before the pandemic’s even begun.”

These themes – the Generation Z worldview, wrestling with the question of what it even means to be alive when the seemingly limitless aspirations of your childhood have been betrayed by the reality of a data-dictated, ecologically-uncertain present – dominate the album. “It's harder to be human now,” Holly believes, “or more complicated than it has ever been. I’ve seen so many young people just spinning in information, feeling like they have all the knowledge but none of the power. I think I’m here to say 'Look, keep it simple, fuck all of this hype, delete your social media, empower your own experience, compare notes with your child self. What would they think? Being happy doesn’t make you ignorant to the world's problems. Love yourself and the everyday shit. It's all here.”

It's all here. Fable is rising above the horizon once again. This time, the stars are aligned.