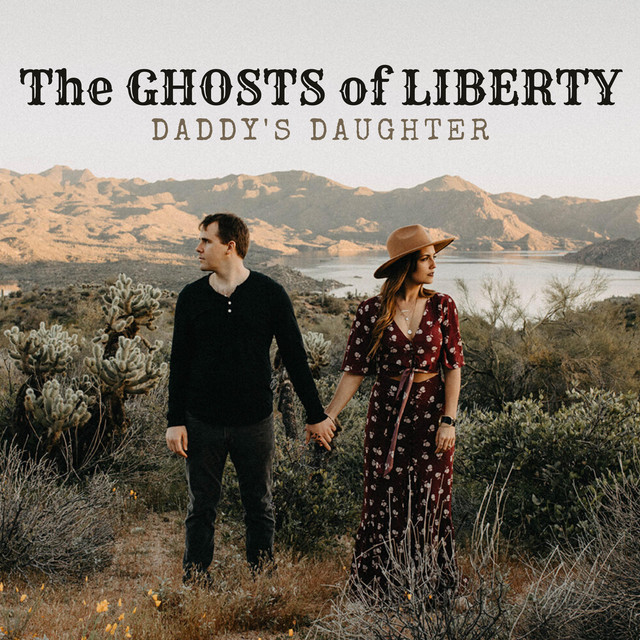 Dark and moody, Daddy's Daughter is an anthemic warning song to any groom out there who would even consider leaving his bride at the altar. A blistering female vocal features plenty of tongue-in-cheek reasons not to mess with a daddy's girl on her wedding day. Accompanying the vocal are acoustic guitars, mandolins, and a marching rhythm which give Daddy's Daughter a swampy insistent feel.

The Americana roots duo that would evolve to become “The Ghosts of Liberty” got its start long before Emma and Tyler Millard knew they would be eventually be married.

When Tyler was 21 sitting in a doctor’s office after having noticed that his peripheral vision had been giving him some trouble during a college game of ultimate frisbee, he received some bad news from his doctor who said, “You’re slowly going blind. You have RP. There’s no known cure.”

Tyler did not let his diagnosis slow him down. He picked up a guitar for the first time and began playing obsessively. His career in teaching was ended with his blindness. He put together a local blues-rock band in his small North Carolina town, and began playing full-time. Over the next several years, his musical chops got sharper as his vision slowly but surely continued to betray him. Tyler exclaimed, “It felt like a race against time!”

Emma taught herself how to wail and belt just like all the country greats as a little girl growing up in the heart of Texas. As life went on, from church choir to classical opera, musicals, and fronting an alternative pop-rock band, she saw a lot of different audiences for a lot of different reasons, but one thing remained the same, which is how much she loved singing for every one of them. Emma reflected on one of her deepest challenges, “Throughout my lifelong struggle with depression, and for all of life’s celebrations, music is my source of purpose."

Fast forward to 2014, Emma met Tyler for the first time at a “jam session”, and they immediately hit it off as friends. She began opening up for his band at local gigs. Meanwhile, she spent hours offstage with him writing and bonding over late night milkshakes at rural dive bar booths. Over time this bonding led to the realization that they make the other better in both life and music. Tyler’s steady, funny, and loving personality gave Emma the confidence to believe in herself and to continue chasing her passion. Emma’s spontaneous and sentimental nature provided Tyler with a ceaseless supply of inspiration and motivation. In 2018, under a giant oak tree, they made their union official in a beautiful late summer ceremony.

In January of 2020, six years after they met and hundreds of live shows later, “The Ghosts of Liberty,” their first child, is officially born. The duo worked with a three time Grammy nominated composer/producer to create a series of singles, one of which is "Daddy's Daughter." You will find the song on all streaming platforms.